Meet the Women in the Energy Transition: Monica Oliphant 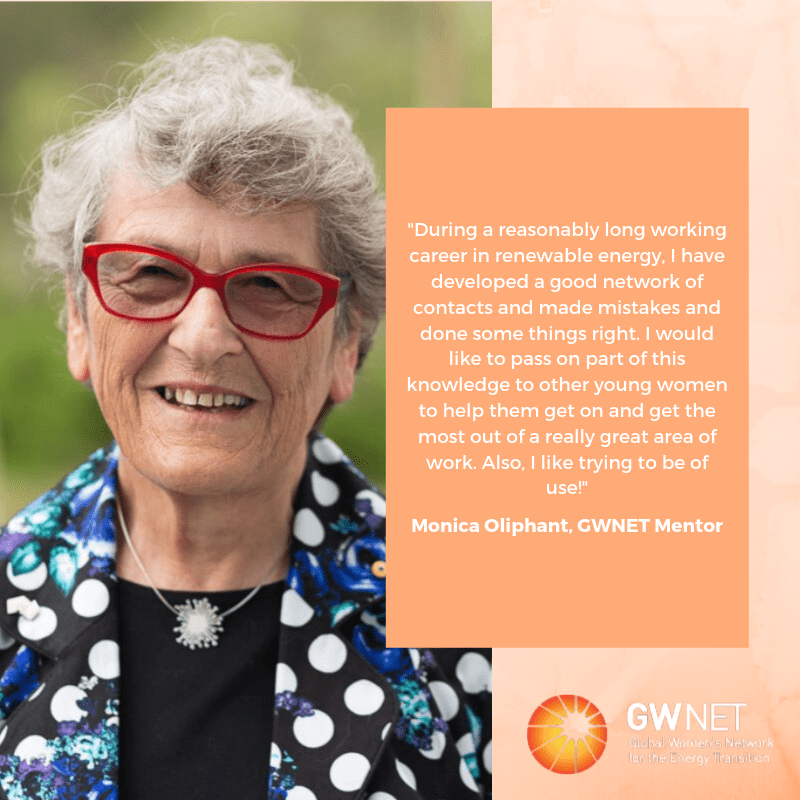 GWNET brings you the 10th instalment of the “Meet the Women in the Energy Transition” series which celebrates the work and achievements of the women who are part of GWNET’s 2/2019 Mentoring Programme. This mentoring programme contains 22 mentee-mentor tandems, with mentees from over 15 countries. Meet GWNET mentor, Monica Oliphant. Monica is a renewable energy specialist with over 40 years working across the sector, in both wind energy and solar. She was the President of the International Solar Energy Society between 2008 and 2010.

1) Tell us a little about yourself. What do you love most about what you do?

I have a background in Physics- MSc (London) and D UniSA. I have worked for over 40 years in Renewable Energy (RE) in the areas of solar, wind and energy efficiency. I began working in the area of concentrating solar thermal research at Flinders University of South Australia (SA) in the 1970’s and then spent 18 years as a Research Scientist in a SA electricity utility undertaking the State’s first large scale wind survey and also working on improving energy efficiency and determining the impact of solar water heating and PV on energy use. I was President of the International Solar Energy Society between 2008 and 2010 and have been on many government committees. It has been a privilege to be part of the emerging energy transition and I must say that it has been very gratifying to see that the RE sources we believed in so many years ago are now mainstream and are being accepted as our future. It has been hard work, good fun and rewarding in that many new and impactful friendships have been made with like-minded people, and my work has given me opportunities to travel extensively around the world.

2) What were your goals when you started working in sustainable energy? Have these evolved?

When I started working in solar in the 1970s, it was during the time of the Arab oil crisis. I heard a Nobel Prize winner on the radio say that if we had solar energy then we would not need to fight over oil. So that was my initial motivation which later evolved into aiding the transition to a world with low greenhouse-gas emissions. 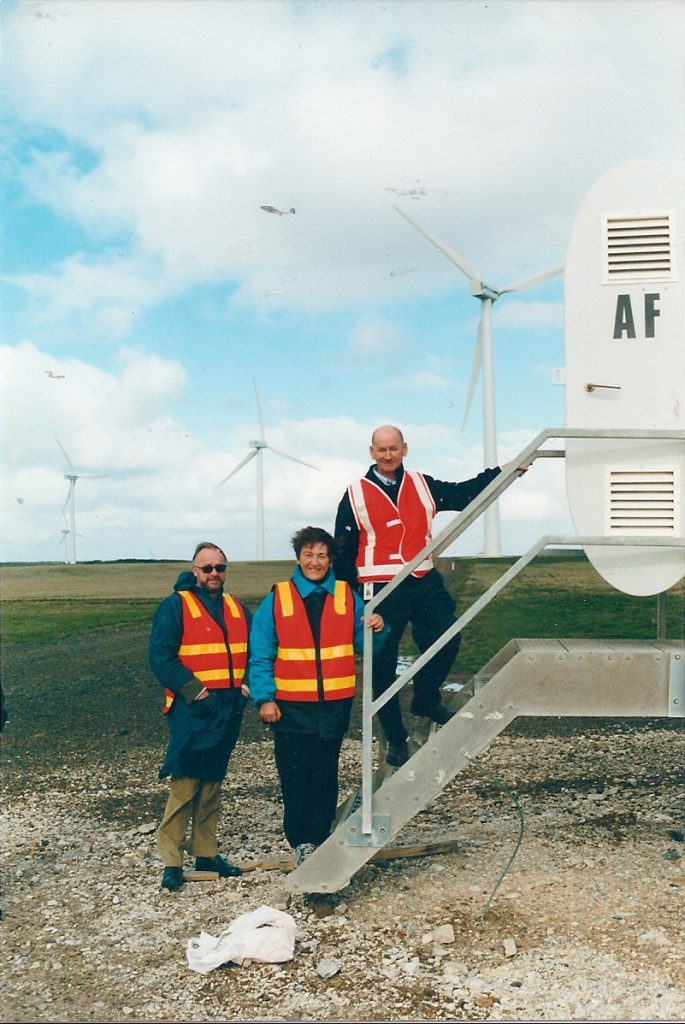 3) What are the opportunities for sustainable energy growth in your country?

I live in South Australia where wind and solar make up over 50% of our electricity generation mix and where a third of homes have roof-top solar. There is growth in the areas of greening electricity, gas and transport. However, in Australia, as a whole, the Federal Government is not greatly supportive of renewables as the country’s high export earners are coal and natural gas. We are also one of the largest exporters of uranium. RE growth here is from the bottom up and driven by some States.

4) What challenges have you faced in the sector? Can you tell us how you overcame (or are overcoming) these challenges?

Initially, RE was thought of as fringe science, and when I joined a vertically integrated electricity utility in 1981 looking at the potential for wind energy and later residential energy efficiency, neither was taken very seriously. I had no female mentors and was the only female scientist, though there were 3 female engineers in the organisation. I had problems with promotion but was helped by complaining to the Union; at that time most people were Union members. However, in the main, I had a great time working at the utility for 18 years and learned a lot about the issues important to the electricity supply industry and I tried to make changes from within. I was given the opportunity to work on many interesting projects including the first and largest solar/diesel power station in the Southern Hemisphere in the Flinders Ranges in 1998. 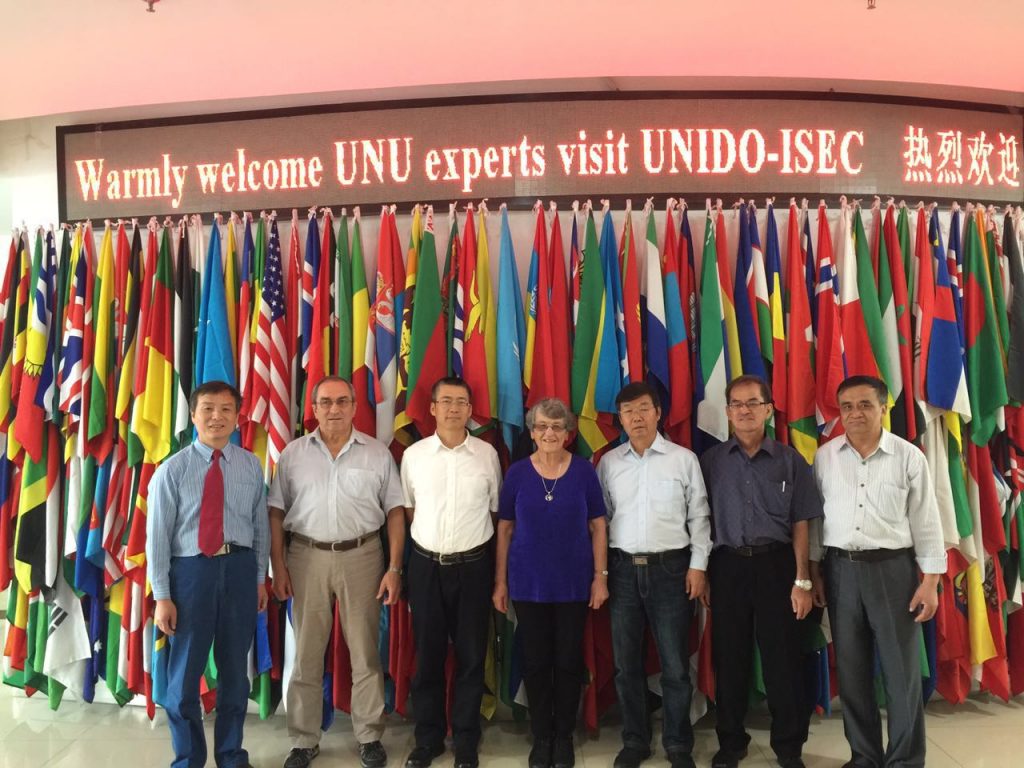 5) Why did you join the GWNET Mentorship Programme? What do you hope to achieve?

During a reasonably long working career in RE, I have developed a good network of contacts and made mistakes and done some things right. I would like to pass on part of this knowledge to other young women to help them get on and get the most out of a really great area of work. Also, I like trying to be of use!

6) What advice would you give to women hoping to join the sustainable energy sector?

I have been asked by some young women what area of RE they should go into. I can suggest some broad areas of growth but I usually advise them to carefully think of topics and areas they passionately believe in and would like to make a difference in, and then try and attain work experience in the field. Originally, I thought I wanted to be an astronomer and spent a summer vacation at an Observatory and soon realised it was not for me. So that was a useful thing to find out early on. Being happy in one’s chosen field of work is very important – regardless of what it is. Sustainable energy covers a lot of topics, both social and technical and can be challenging, satisfying and worthwhile.

If you are interested in knowing more about GWNET’s mentoring programmes, this comprehensive article outlines our work in this area.

Become a mentor – what’s in it for you?

GWNET is looking for senior professionals who are eager to make a difference and have a positive impact on a younger woman’s career in the energy sector. With the ever-changing dynamics of the business fields, digitalisation, knowledge and knowledge sharing has become more important than ever. As a mentor, you get the opportunity to give something valuable back to more junior professionals and to expand your own knowledge through your mentees’ perspective. Mentoring will contribute to personal and professional development for both you and your mentee, as well as, shaping the direction of future generations within your field of expertise.

If you are interested in volunteering as a mentor in one of GWNET’s mentoring programmes (which involves approx. 1 – 1.5 hours of engagement per month plus optional participation in knowledge-transfer webinars), kindly fill-in the Mentor Datasheet.