How Women Can Power the Green Transition 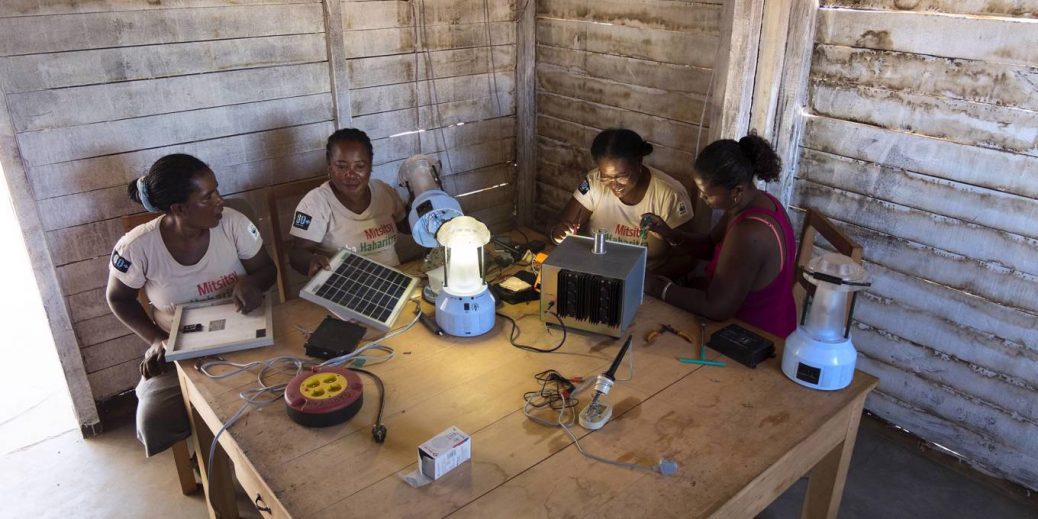 By GWNET President, Irene Giner-Reichl. This article was originally posted on the Project Syndicate website.

The world needs to shift from the current fossil-fuel-based energy system to carbon neutrality. Most obviously, this will require countries to roll out renewable energy and integrate it into the electricity grid, boost energy efficiency, upgrade infrastructure, and refine the governance of electricity and energy markets. Less apparent, success will require that women are able to contribute to the transition on an equal footing with men.

Energy transitions will differ depending on countries’ development priorities, the proportion of the population with access to power grids, the current energy mix, and projected demand. Some transitions may involve simply retrofitting old, unsustainable assets in order to reduce carbon dioxide emissions, while others may be part of a multifaceted development strategy for societal transformation, including gender equality and inclusion. But all countries should commit to creating jobs and leaving no one behind.

Although the available data vary considerably, women probably represent – at most – one-third of the global sustainable energy workforce. And their share typically is much lower in the so-called STEM professions (science, technology, engineering, and mathematics) and in executive positions. Unsurprisingly, awareness of gender dynamics in the workplace also tends to be low. Moreover, policies that could help redress the current imbalance in the sector – such as flextime, parental leave, return-to-work schemes, bias-free recruitment and promotion, and gender-balanced boards and panels – are scarce.

These barriers to the full participation of women are, first and foremost, an infringement of human rights, in particular women’s right to full and equal participation in the life of their communities. Governments therefore have a duty to eliminate discrimination against women and establish frameworks to help empower them and enable their advancement.

In addition, the under-representation of women deprives energy transitions of diverse talent, and thus impedes the transformational change required to achieve global climate targets and the United Nations Sustainable Development Goals. Conversely, the equal participation of women in the workforce is demonstrably good for business, the economy, social development, and the environment.

These findings are not new. In its 2012 World Development Report, for example, the World Bank emphasized that gender equality not only is a core development objective in its own right, but also enhances an economy’s productivity and improves future generations’ prospects. And during the 2009 global economic downturn, a global survey by the consulting firm McKinsey & Company concluded that women leaders represent “a competitive edge in and after the crisis.” Likewise, having a higher percentage of women in decision-making positions increases innovation and profitability, decreases risk, and enhances sustainability practices.

Green-energy transitions provide opportunities to tackle systemic gender discrimination and enable societies to reap the benefits of a more diverse workforce. That is partly because sustainable energy is a new and fast-growing field: the number of people employed worldwide in the sector is expected to increase from an estimated 11 million today to over 42 million in 2050. In addition, the scope of the transitions calls for a diverse range of skills, including civil engineering, environmental science, marketing, teaching, and community action.

The good news is that governments, firms, and universities around the world are implementing a wide variety of strategies to make the green transition more diverse and inclusive. For example, Rwanda’s 2003 constitution sets a mandatory minimum female quota of 30% for all decision-making bodies, including those related to sustainable development and energy. The mandatory quota sent a powerful signal to society and was more than doubly filled in both the 2013 and 2018 parliamentary elections, in which women won more than 60% of the seats.

In the business world, Turkish firm Polat Energy recently took out a $44 million “gender loan” to finance the construction of Turkey’s largest wind farm. The loan terms will improve if the company demonstrates further progress toward gender equality relative to an initial baseline.

Elsewhere in the energy sector, Wind Denmark has gone beyond the country’s already generous parental leave policy for both women and men, while ScottishPower is championing a “return to work” program. Likewise, wind turbine manufacturer Siemens Gamesa promotes flexible work arrangements and transparent pay-gap analysis, leading the United Kingdom’s government to certify recently that the company’s female employees in the UK earn 95% of what their male colleagues do.

Academic institutions and NGOs are also playing their part. The Australian university UNSW Sydney has reported a 78% increase in female first-year engineering enrollments since it launched its Women in Engineering Program in 2014. And the Global Women’s Network for the Energy Transition, an international NGO that offers networking, mentoring, and training programs for women working in the energy sector, recently published a study on how to make sustainable energy more gender-diverse.

Energy transitions are essential to limit global warming and build a more sustainable future. Achieving them is in everyone’s interest. As countries everywhere embark on “building back better” after COVID-19, energy transition strategies should be a key element in any stimulus package. And they will be far more likely to succeed if women play a central role.