From 31 October until 4 November 2022, 17 women from five Central Asian countries visited Vienna, Austria, for a study tour as part of the Empowering Central Asian Women in Renewable Energy Mentoring Programme. This programme is organized by the Organization for Security and Co-operation in Europe (OSCE), together with the Global Women’s Network for the Energy Transition (GWNET).

Below follows a brief recap of the programme of this study tour.

After an official welcome by OSCE and GWNET in a typical Viennese cafe, the participants enjoyed a presentation by Ronald Langthaler, Head of Corporate and Public Affairs at Verbund, Austria’s largest electricity provider. Mr. Langthaler explained Verbund’s strategies for the energy transition and engaged in a lively discussion with the participants.

In the afternoon, the group visited Seestadt Aspern, one of Europe’s largest, most innovative and most sustainable urban development projects. With the help of a model, Gerhard Schuster, CEO of the company developing Seestadt Aspern, explained the people-centric and sustainability-focused principles underlying the new neighbourhood’s design. Afterwards, the participants had the opportunity to see the development for themselves. 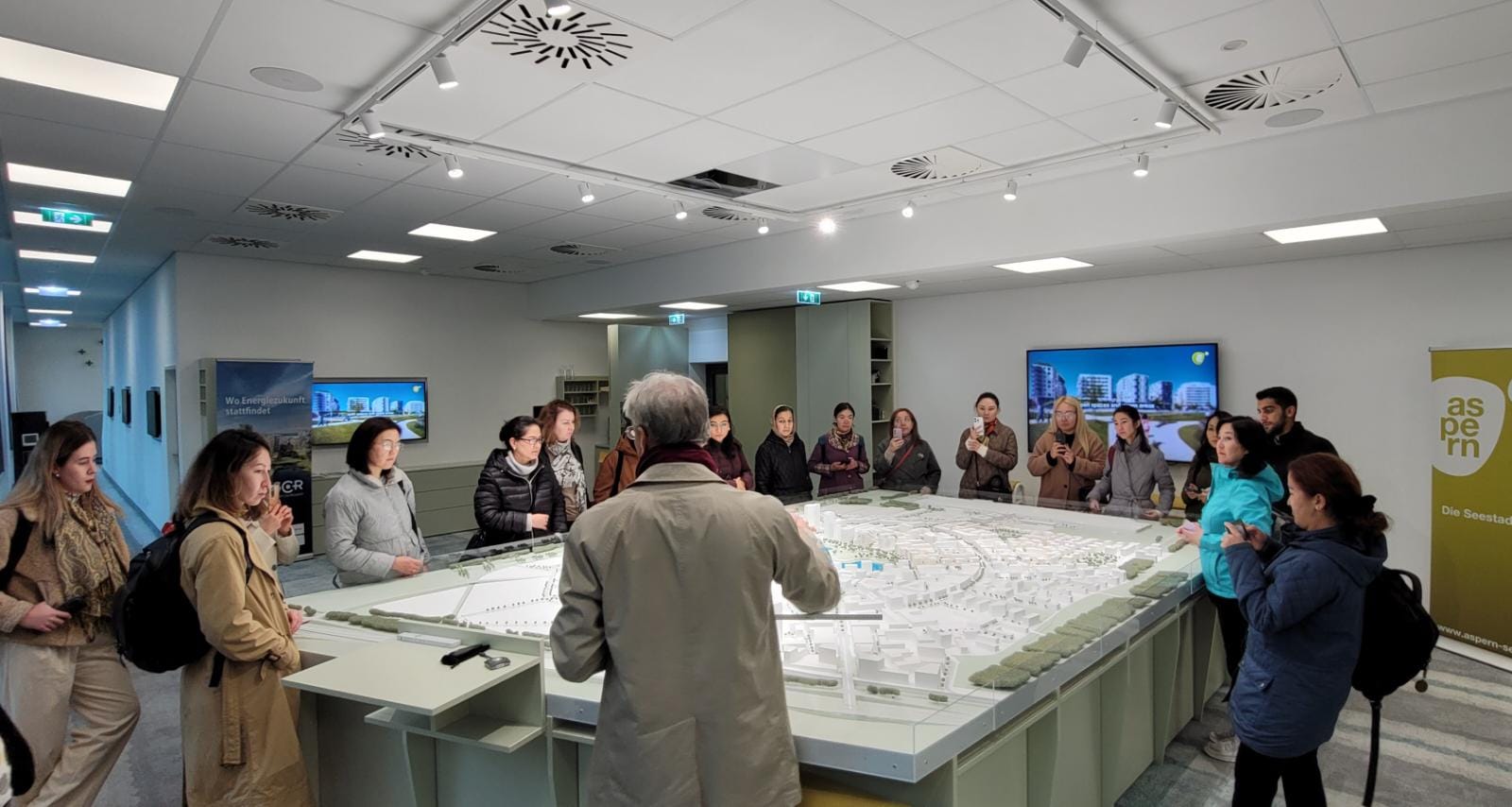 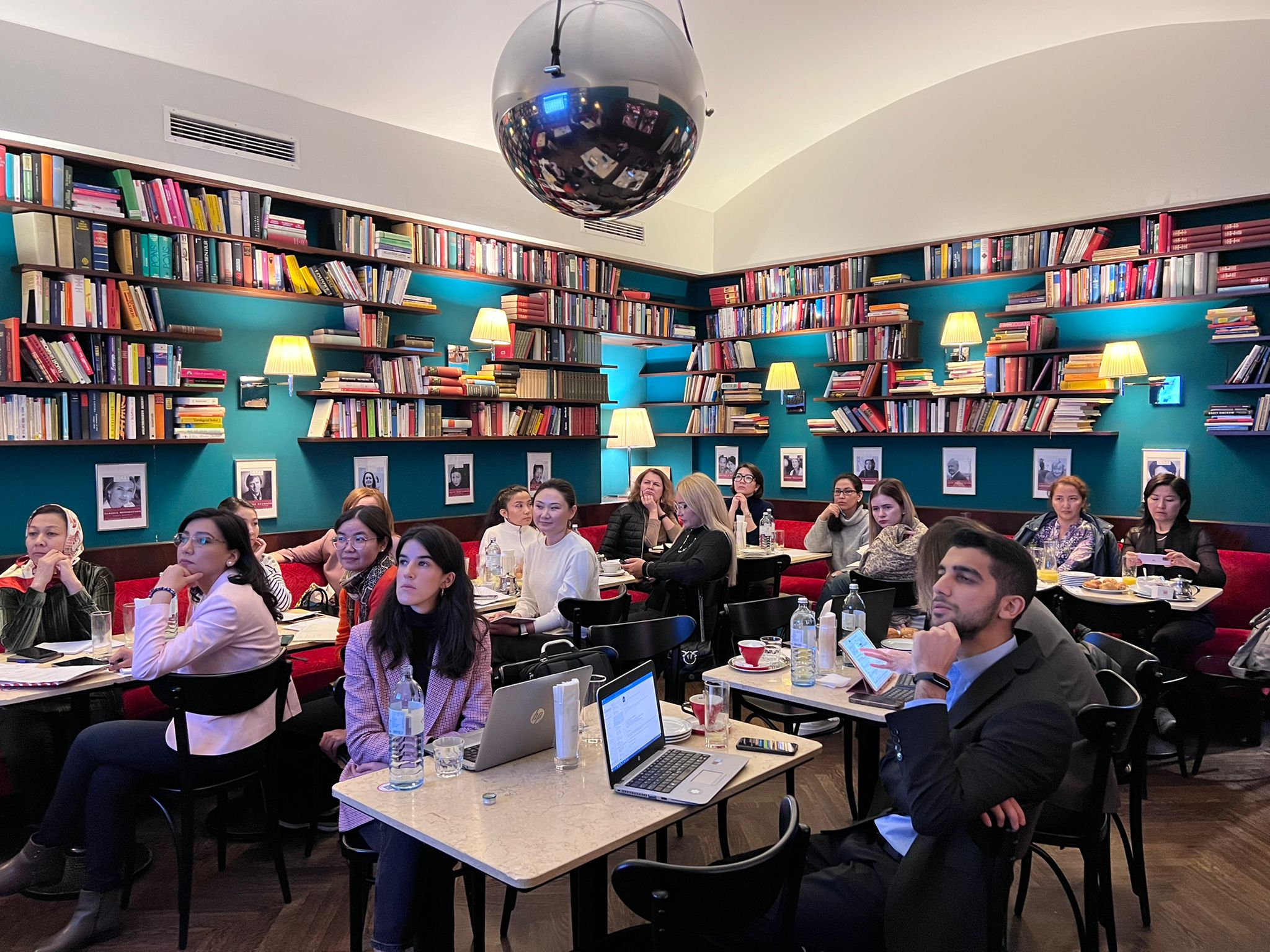 On the second day of the study tour, participants enjoyed a business breakfast hosted by the Secretary-General of the OSCE, H.E. Helga Maria Schmid. During this breakfast, which was a highlight of the study tour for many of the attending women, the group was welcomed by H.E. Schmid and Ambassador Igli Hassani, Coordinator of OSCE Economic and Environmental Activities. Also in attendance were Permanent Representatives of the Central Asian countries as well as of the donor countries of the mentoring programme: Austria, Germany, Italy, Norway, and Poland. The participants had the opportunity to introduce themselves to the assembled dignitaries, after which each ambassador addressed the group.

After breakfast, the group headed to the Vienna International Center. The participants first received a presentation about the gender and energy work of the United Nations Industrial Development Organization (UNIDO), by experts Marco Matteini and Otalia Sacko. After this, the group took a guided tour of the Vienna International Center, which besides UNIDO also houses the International Atomic Energy Agency (IAEA), the United Nations Office on Drugs and Crime (UNODC), the Preparatory Commission for the Comprehensive Nuclear Test-Ban Treaty Organization (CTBTO), and the United Nations Office for Outer Space Affairs (UNOOSA), among others.

In the afternoon, the participants had some free time to explore Vienna. In the evening, they attended the ballet ‘Dornröschen’ (Sleeping Beauty) at the Vienna State Opera. 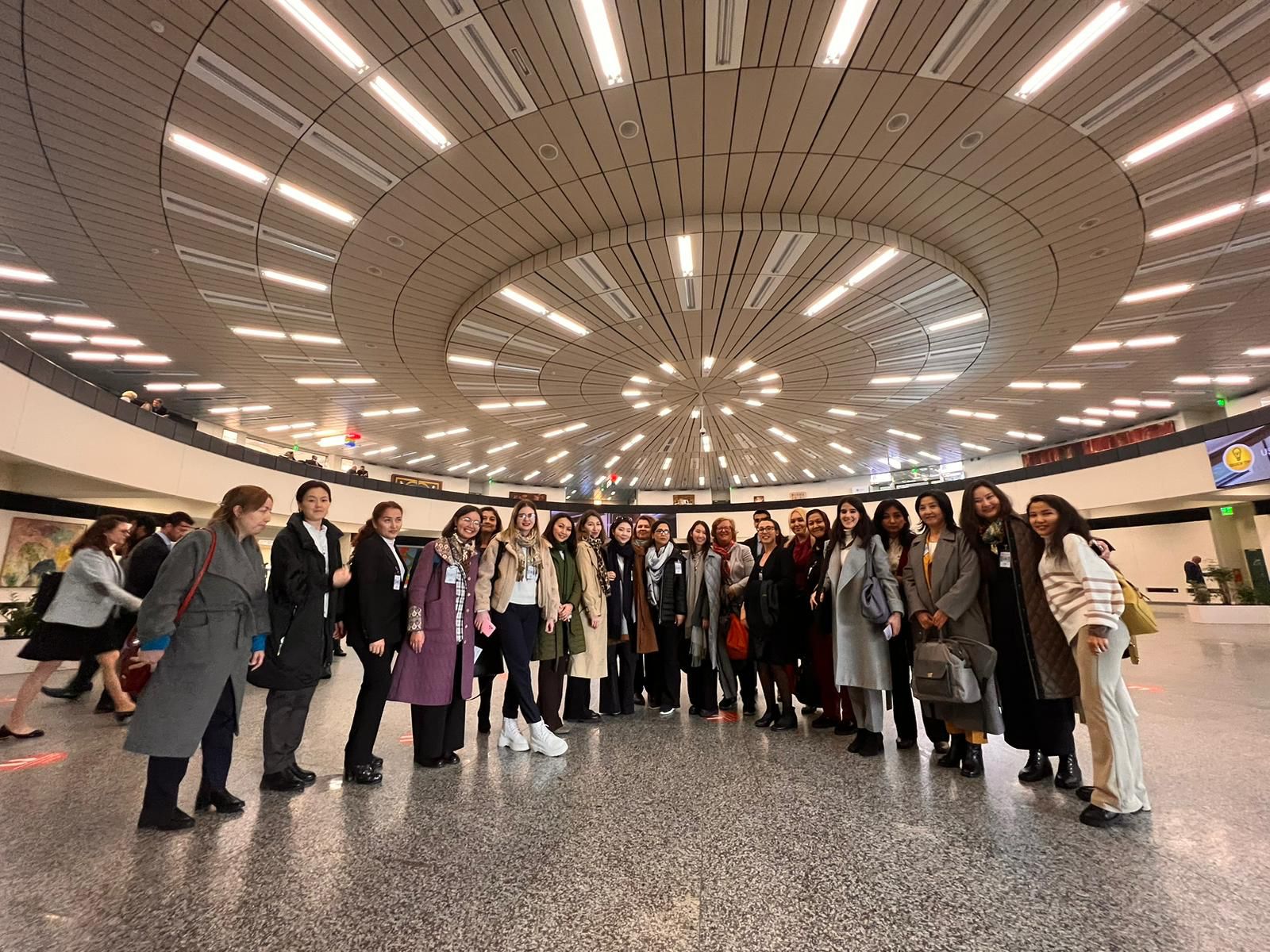 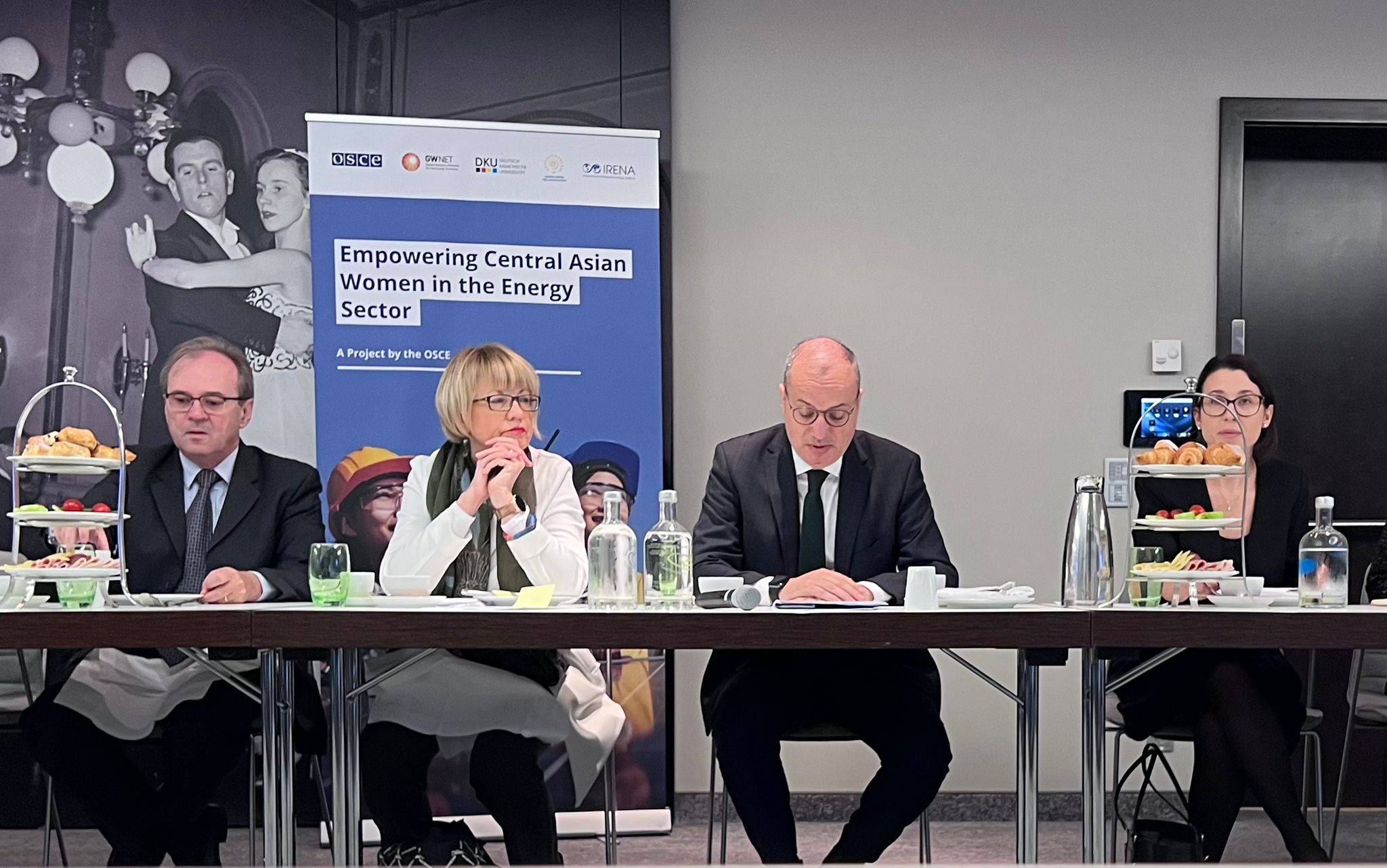 On the third day of the study tour, the participants attended a female leadership workshop with Maren Wölfl at the newly opened Climate Lab – an innovation space that seeks to accelerate progress towards climate neutrality. The participants were encouraged to investigate their own ambitions, their helpful and unhelpful patterns, and the things that have helped them achieve success, to ultimately be able to confidently answer the question: ‘What are you really good at?’

After the leadership workshop, the group visited the waste incineration plant at Spittelau. This plant incinerates about one third of Vienna’s residual waste, and produces electricity and city heating for tens of thousands of households. Its iconic exterior was designed by the Austrian artist Friedensreich Hundertwasser. The fourth day of the study tour was again packed full of excursions. After a morning meeting with Alexander Schwab, Senior Vice President at Andritz Hydro, the group attended a meeting of the Vienna Energy Club, which gathers international organisations working on energy and headquartered in Vienna.

At this meeting, the participants shared some of their expertise on energy security and energy transition challenges in the Central Asian region, and on the realities of being a woman in the male-dominated energy industry. After this meeting, the group visited OMV, the Austrian oil, gas, and petrochemical company, where Eva-Maria Pusch, Head of Market & Competitive Intelligence, painted a picture of OMV’s energy transition plans. 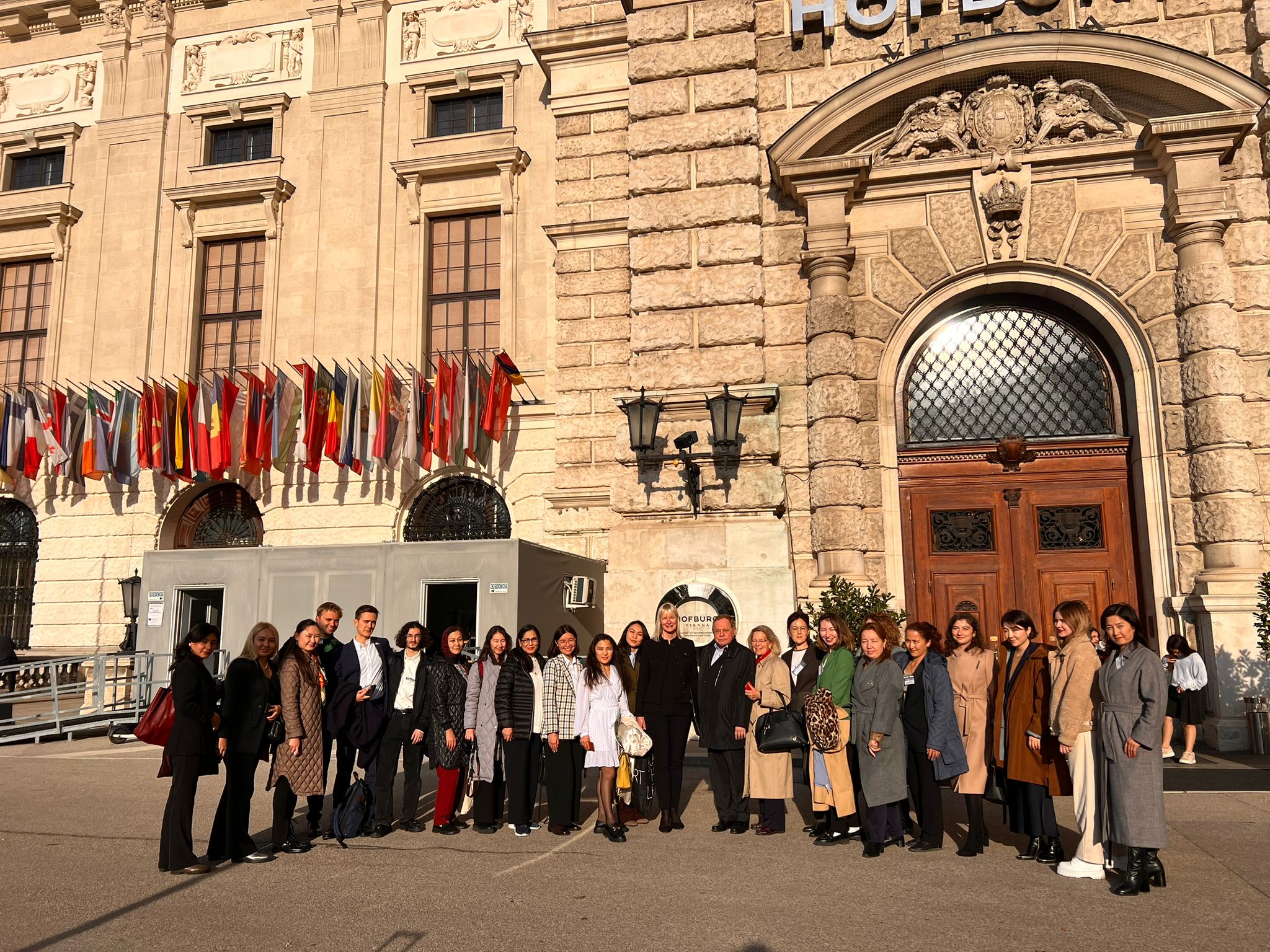 On the last day of the study tour, the participants attended the 5th Vienna Energy Security Dialogue, convened by OSCE together with the World Energy Council (WEC). At this one-day conference, experts discussed the way forward for oil and gas and renewables given the energy security challenges wrought by Russia’s war against Ukraine. A final panel, which included Irene Giner-Reichl, Senior Advisor to GWNET, examined the challenge of ‘humanizing’ the energy transition and the need for gender equality in future energy sectors. 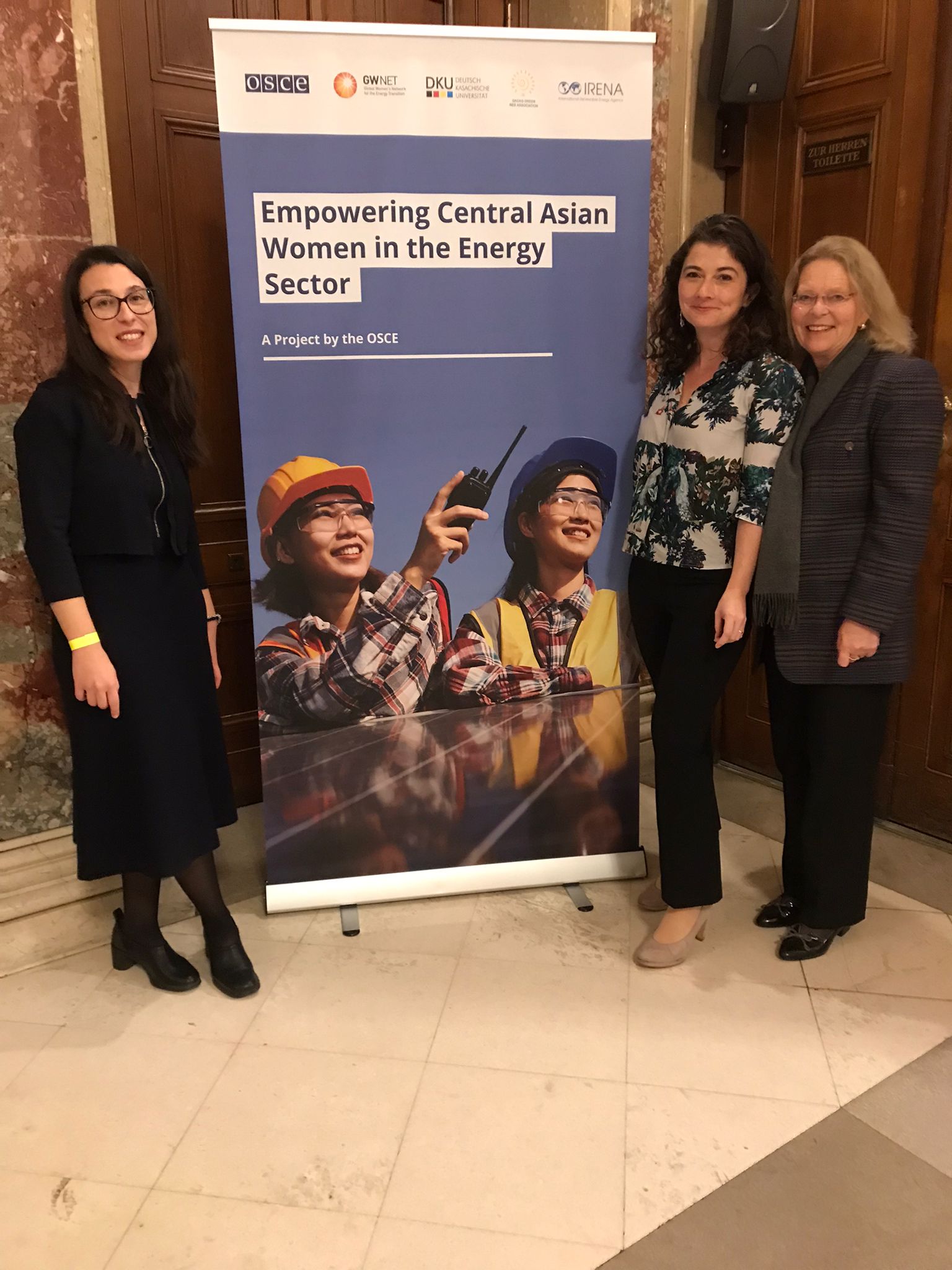 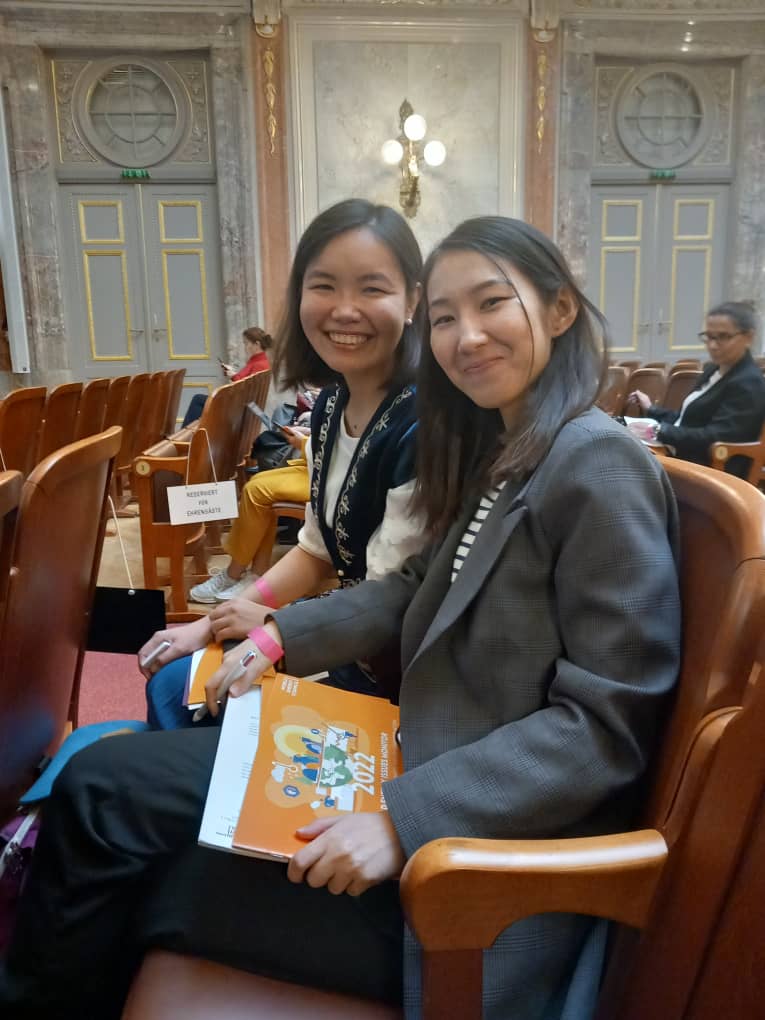 Some participant feedback on the study tour can be found below. As co-organisers, we were delighted to be able to receive these 17 inspiring women in Vienna, to hear their stories and to connect them to each other and to the many Austrian and international organisations that they met over the course of the week. We will stay in touch with the participants and continue to celebrate and share their success stories.

“It was a great pleasure to meet energy experts in Vienna – this study tour had a great impact on my professional and personal life. I started to think more broadly and make bigger future plans. I learned a lot from my mentor, speakers, and fellow participants that will have a positive influence on renewable energy development in Kazakhstan.”

“The program of the study tour was very useful, interesting and with good examples. The trip impressed me with the scale of work in Europe, and after the trip my motivation to develop and be useful to society became even greater. Acquaintance with other participants of the project was one of the pleasant moments of the trip. Thanks to the organizers of the trip for the high degree of organization. A trip to Vienna, acquaintance with the work of organizations was impressive!”

“I just want to say thank you for an amazing and enriching week of great opportunities! It was incredible!”