The Role of Gender in the Energy Sector 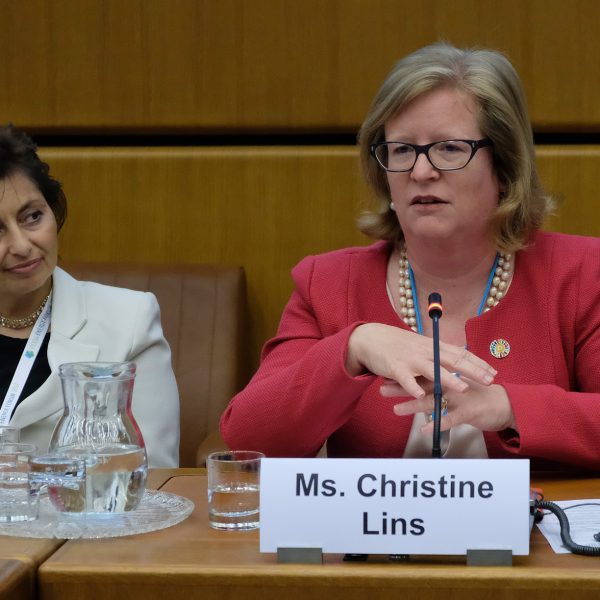 While the energy sector has traditionally been male-dominated, that’s starting to change. Christine Lins, Executive Director of GWNET (the Global Women’s Network for the Energy Transition) shows how attracting and retaining the best female, as well as male, talents in the renewables sector are key to ensuring a successful and speedy energy transition.

“Why don’t you look for a proper job?” was what I was told. It was 2000 and renewables were still in their infancy. Leaving Austria to set up an umbrella organization for the European renewable energy industry in Brussels was not seen by many as a promising career option.

Well, I guess reality has caught up with those cynics. Less than two decades later, renewable energy accounts for 70% of net additions to global power generation capacity and investment in new renewable power capacity is roughly three times that in new fossil fuel capacity. However, the progress made so far is not enough to bring us even close to reach the objectives of the Paris climate agreement to hold the global average temperature rise well below 2°C, not to mention a much safer limit of 1.5°C. Energy-related CO2 emissions are still on the rise. The rapid renewables uptake in the power sector shows that the energy transition with renewables and energy efficiency is possible, but we need to do more in the fields of heating and cooling as well as transport and we need to better integrate planning policies and regulatory frameworks.

While we can‘t predict the future, we do need to debate the opportunities and challenges of a 100% renewable energy future. We need to understand how system integration can shift thinking from the traditional perspective of baseload power to one where optimal integration of variable renewable energy provides on-demand, reliable, affordable electricity and brings added-value to grid infrastructure. And we need to rely on all talents available, from both men and women.

WHERE ARE ALL THE WOMEN?

Currently, there are about 11 million people working globally in the renewable energy sector. This share is supposed to rise to about 30 million jobs by 2050. Attracting and retaining the best female and male talents in the clean energy sector are key to ensure a successful and speedy energy transition.

It is a well-known fact that the energy sector continues to be male-dominated. The absence of gender equality can be observed both in industrialized and emerging and developing countries. According to the recently launched IRENA study Renewable Energy: A Gender Perspective, the renewable energy sector employs approximately 32% women, as compared to 22% in the oil and gas sector. While women perform better in the renewable energy workforce, their share of employment falls below that of the economy at large that is 40-50% in most of the OECD countries. They are particularly underrepresented in STEM-related jobs (28%), a much lower share than in administrative jobs (45%). The IRENA study is based on a global survey with about 1,500 responses from 144 countries and identifies several barriers preventing women from entering and advancing in their careers and provides policy recommendations about how to make the energy sector more gender-balanced.

Specific barriers to entry include prevailing hiring practices, as well as the lack of relevant skills, awareness and networks. The survey-based results of the study highlight the glass ceiling as the most significant barrier to retention and advancement. Other challenges relate to the lack of a supportive environment – flexible work hours, family-friendly measures, mentoring, networking, training opportunities and gender equity targets. Mobility requirements and difficult work schedules also play a role.

Cultural and social norms again play a major role in the context of access, where modern energy services are limited. Additional barriers relate to lack of gender-sensitive programmes and policies, insufficient skills and training opportunities, inequity in ownership of assets, and lack of access to finance.

Gender diversity in renewable energy can be substantially improved in both the modern and access contexts. To engender the energy transition requires actions at different levels:

If the global energy transformation is to drive sustainable growth and development, it needs to be inclusive in every sense. And women have to be part of it.

THE IMPACTS OF CLIMATE CHANGE ON WOMEN

Furthermore, the impacts of climate change are not felt equally. While poverty and geography are important dividing lines, so too is gender. Climate-change induced disasters disproportionately affect women. When disaster strikes, women, who still often play the primary role of looking after children and the elderly, are the last to evacuate, leading to higher female death tolls. Around 90% of the 150,000 people killed in the 1991 Bangladesh cyclone were women. They typically have less access to emergency response information and if they do survive, women, especially in poor or marginalized communities, are often less able to rebuild and recover.

Solutions to climate change and a sustainable energy supply need to work for everyone, yet women’s voices and needs are still often excluded from the decision-making table. The problem of climate change is simply too big to overlook half the world’s population and ignore female talent. Gender diversity drives innovation, opens new pathways for technology deployment, brings fresh perspectives to development of societies and attracts and retains a richer pool of talent.

With this in mind, a group of senior energy professionals got together in 2017 to create GWNET, the Global Women’s Network for the Energy Transition, a global network aimed at empowering women working in sustainable energy in developed and emerging/developing countries at different career levels from the public and private sector through interdisciplinary networking, advocacy, training, coaching and mentoring.

The network, which already consists of more than 800 members from over 88 countries, is open for individuals and corporations who are committed to gender balance in the energy sector and who wish to connect with their peers and to advance the energy transition more rapidly. The Women in Energy Expert Platform was created to enhance our members’ experience of being part of this network. It provides visibility to women working in the sustainable energy field. Most importantly, it encourages greater visibility for women, more networking opportunities and enhanced relations between them.