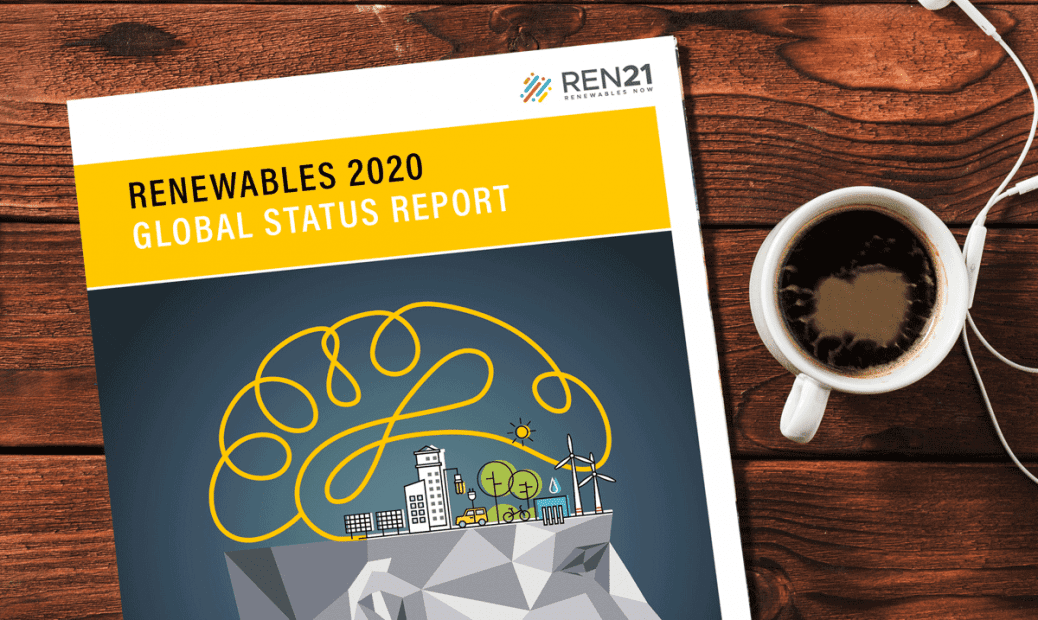 Growth in renewable power has been impressive over the past five years. But too little is happening in heating, cooling and transport. Overall, global hunger for energy keeps increasing and eats up progress, according to REN21’s Renewables 2020 Global Status Report (GSR), released today. The journey towards climate disaster continues, unless we make an immediate switch to efficient and renewable energy in all sectors in the wake of the COVID-19 pandemic.

“Year after year, we report success after success in the renewable power sector. Indeed, renewable power has made fantastic progress. It beats all other fuels in growth and competitiveness. Many national and global organisations already cry victory. But our report sends a clear warning: The progress in the power sector is only a small part of the picture. And it is eaten up as the world’s energy hunger continues to increase. If we do not change the entire energy system, we are deluding ourselves,” says Rana Adib, REN21’s Executive Director.

The report shows that in the heating, cooling and transport sectors, the barriers are still nearly the same as 10 years ago. “We must also stop heating our homes and driving our cars with fossil fuels,” Adib claims.

There is no Real Disruption in the COVID-19 Pandemic

In the wake of the extraordinary economic decline due to COVID-19, the IEA predicts energy-related CO2 emissions are expected to fall by up to 8% in 2020. But 2019 emissions were the highest ever, and the relief is only temporary. Meeting the Paris targets would require an annual decrease of at least 7.6% to be maintained over the next 10 years. Says Adib: “Even if the lock-downs were to continue for a decade, the change would not be sufficient. At the current pace, with the current system and current market rules, it would take the world forever to come anywhere near a no-carbon system.”

“Many Recovery Packages Lock us into a Dirty Fossil Fuel Economy”

Recovery packages offer a once-in-a-lifetime chance to make the shift to a low-carbon economy. But according to Adib there is a great risk for this enormous chance to be lost. “Many of these packages include ideas that will instead lock us further into a dirty fossil fuel system. Some directly promote natural gas, coal or oil. Others, though claiming a green focus, build the roof and forget the foundation,” she says. “Take electric cars and hydrogen, for example. These technologies are only green if powered by renewables.”

The report points out that “green” recovery measures, such as investment in renewables and building efficiency, are more cost effective than traditional stimulus measures and yield more returns. It also documents that renewables deliver on job creation, energy sovereignty, accelerated energy access in developing countries, reduced emissions and air pollution.

This contrasts with the true cost of fossil fuels estimated to be USD 5.2 trillion, if costs of negative impacts such as air pollution, effects of climate change, and traffic congestion are counted.

Renewable energy systems support energy sovereignty and democracy, empowering citizens and communities, instead of big fossil fuel producers and consumers. “When spending stimulus money, we have to decide: Do we want an energy system that serves some or a system that serves many?”, says Adib. “But it’s not only about money. We must end any kind of support to the fossil economy, particularly when it comes to heating, cooling and transport. Governments need to radically change the market conditions and rules and demonstrate the same leadership as during the COVID-19 pandemic.”

“As we celebrate the impressive uptake in and mainstreaming of renewable energy over the last few years, we recognise that there is still significant work to be done in transforming our existing energy systems. It is very clear that energy transitions – and the deep societal transformations they entail – require the best available talent to succeed, and that we must work to fully include the valuable viewpoints, experiences, and skills of women if we are to reach the goals we’ve set out. The energy transition must be just, equitable, and gender-inclusive!”

“It is clear, renewable power has become mainstream and that is great to see. But the progress in this one sector should not lead us to believe that renewables are a guaranteed success. Governments need to take action beyond economic recovery packages.  They also need to create the rules and the environment to switch to an efficient and renewables-based energy system. Globally. Now.” concludes Arthouros Zervos, President of REN21.

About the REN21 and the Renewables Global Status Report (GSR)

REN21 is the only global community of renewable energy actors from science, academia, governments, NGOs and industry across all renewable energy sectors. They provide up-to date facts, figures and peer-reviewed analysis of global developments in technology, policies and markets to decision-makers. Their goal: encourage and enable them to make the shift to renewable energy happen – now!

Their annual publication, the Renewables Global Status Report, is probably the world’s most comprehensive crowdsourced report on renewables. The 2020 edition has been co-authored by over 350 experts.